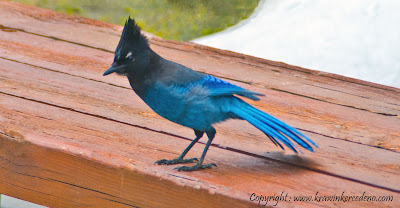 British Columbia's provincial bird is a bright blue jay, but it is not the Blue Jay of eastern North America. This member of the crow family is bright blue on its wings, tail, and underparts, with a black hood extending from its upperparts to the top of its crested head.

The species was first collected by the German naturalist Georg Steller, while working as a doctor on one of Vitus Bering's expeditions to Alaska.

It is most common on Vancouver Island and in the southern part of the province, from sea level to about 2,100 meters in the interior, preferring coniferous and mixed deciduous-coniferous woodlands. Steller's Jays, like other members of the crow family, are opportunistic omnivores. This species is an important player in the dispersal of Garry Oak acorns, which it collects, and caches for future use. In the spring, jays will prey on the eggs and nestlings of other birds.

The Steller's Jay gives a variety of raucous calls and scolds, and is an accomplished mimic; it will often give the call of a Red-tailed Hawk when an interloper comes into its territory.

Steller's Jays are common visitors to forested parks, and will venture into suburban areas in some winters.